In this blog, Dr Clarissa Giebel, Senior Research Fellow at the University of Liverpool, shares her experience of running the Great North Run in support of The Lewy Body Society. Thank you Clarissa, and well done on also completing the London Marathon a few weeks later.

After 18 months, finally setting my trainers onto race-pavement again felt incredible, and also a little bit emotional. With races cancelled for so long, it felt fantastic being finally at a start (and finish) line again. I’ve never run the Great North Run before, but it was definitely on my race list. Luckily, I was able to secure a space for a charity close to my heart – The Lewy Body Society.

As expected, it is one of the biggest half marathons in the world. It states it is the biggest, but I believe there is some competition with Scandinavian ones in terms of size. Anyways, it was certainly one of the, if not the, biggest race I have taken part in. Apparently 57,000 runners were registered!

Having taken up the train to Newcastle the day before, it was easy enough to find the start area in the morning, with thousands of runners across the city centre weaving their way to the start line. You even got free water before the race, which I have never experienced.

Now, my experience will go a little bit different, but it really is down to whether you run for fun or for a PB I guess. I am the latter, or try to depending on the conditions on the day. Having been allocated to an early orange wave, I thought runners were organised based on expected finishing time. But no.. All 10ish orange waves had to assemble at the same time, mixed. The annoying thing was, because there were just too many runners, there was little chance to run straight, and it was more a hurdle run-around than a race.. As a result, I ran 250 metres more than the course was, weaving around people, and getting run into.

Again, this is my experience. It would be great for the organisers to break the waves down better, or indeed have fewer people take part. Apart from that, and if you are in for a fun run, then certainly go for this one. You will certainly see a lot of fancy dress, I stood next to Marge Simpson by the toilet cubicles!

But let’s not forget, I ran the race for The Lewy Body Society, to raise awareness and help raise some important funds to support the great work they do for people affected by the condition. If you have anything to spare, there is still time to donate via my fundraising page. 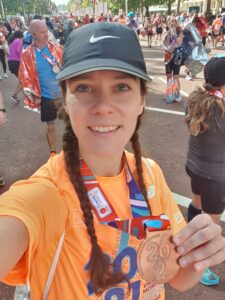 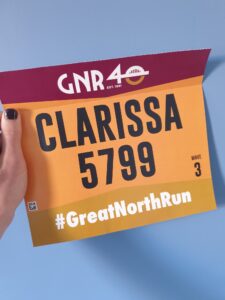