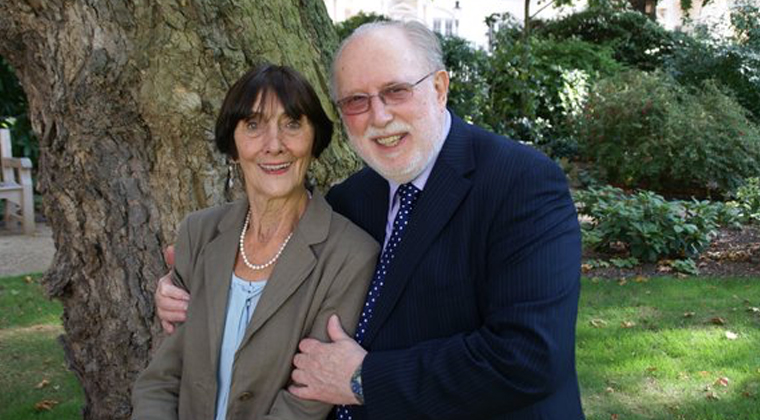 It was with great sadness and an enormous sense of loss that the Lewy Body Society learned of the death of Peter Ashley on 10 November 2015.

Peter was a leading dementia advocate, known throughout the UK and Europe. Diagnosed with DLB in 2000, Peter accepted the challenge of living a full and fulfilling life with DLB with determination, strength and good humour. He and his wife, Ann were true inspirations to everyone affected by this terrible disease.

For many years Peter worked indefatigably for Alzheimer’s UK as an ambassador. I met Peter in 2007 at a conference in Berlin where he had spoken eloquently about his experience of living well with DLB. We knew each other by reputation and were both delighted to meet in person. He was very pleased that a charity dedicated exclusively to Lewy body dementias had been set up and offered his help, which I accepted with alacrity. Peter became a valuable member of what was called The Council of Wise People – a group of advisors who were neither trustees nor on the Scientific Advisory Committee. He never missed a meeting, whether it was in London or Scotland and always contributed excellent ideas. He eventually severed his connection with AlzUK to be an Ambassador for the Lewy Body Society.

When the Society produced a information DVD in 2009, Peter very kindly offered to appear as someone living with the disease. This can be seen on YouTube.https://www.youtube.com/watch?v=s0_7sojlQms

Despite all of his problems, Peter maintained a sense of the absurd. We always had a laugh, whether it was making jokes about our shared name or my bizarre experiences as a newly single woman dating for the first time in decades. And we talked about organ music. He was like a favourite uncle to me.

The last time I saw Peter and Ann was at a conference last year. I was shocked and saddened to see that he was in a wheelchair and visibly not well. He had conquered a number of medical problems in addition to Lewy body in the past and was now facing a losing battle with cancer.

Our hearts go out to Ann and the family and there will always be a place for him in those who knew him. He will be greatly missed.