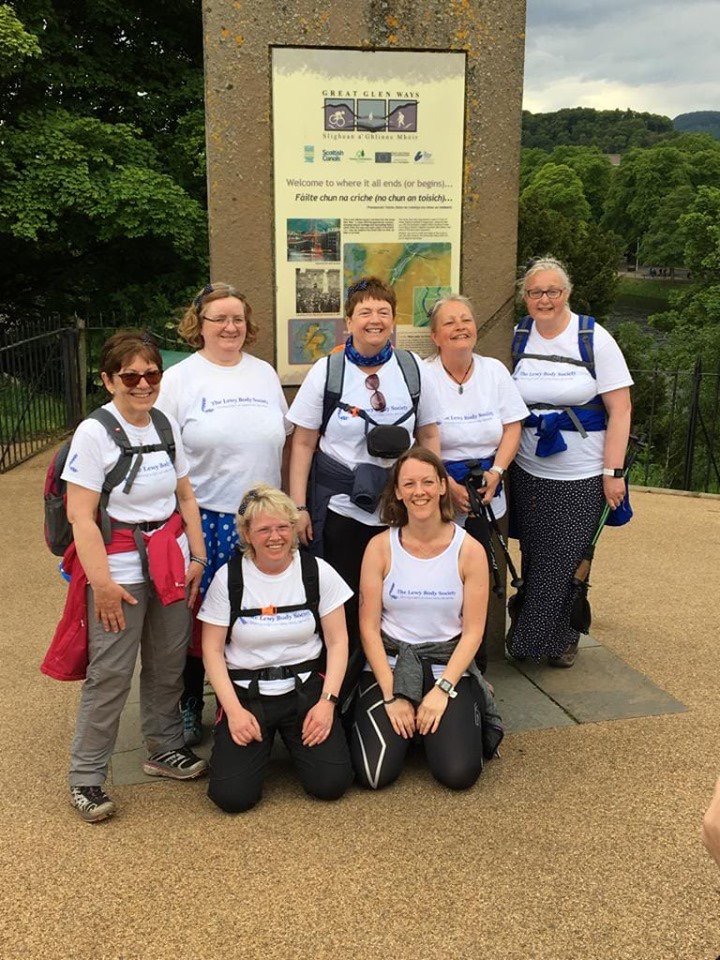 Margaret Taylor and five of her friends recently completed the Great Glen Way, a tough 73 mile walk across the Scottish Highlands from Fort William to Inverness.  This is the inspiring story – in Margaret’s own words – of the motivation behind their challenge, the laughs along the way, and the fantastic support they received.

Margaret supports us a charity as her brother Cormac has Lewy body dementia, but all her friends have also been affected by dementia in one way or another.  It is a condition that touches nearly everyone in our society, whether as a patient, a carer or a friend.

That is why we work tirelessly to raise awareness of Lewy body dementia, and to fund clinical research so that we can develop better ways to diagnose and treat it. The funds raised by Margaret and her friends will make a huge difference and we are so grateful for their efforts.

“In December 2018 our friend and colleague Margaret Ross suggested that we should try a long-distance walk.  We had been trying to keep fit for the previous two years and wanted to set ourselves a challenge. She mooted the idea to other friends and colleagues and six of us signed up. It was at this point we decided to raise funds for The Lewy Body Society, in support of my brother Cormac who has Lewy body dementia.

We started our training in January so we were prepared for all types of weather.  It took several miles to get the footwear and clothing right, so a tip for anyone taking on a similar challenge is to start the training early and get this right, as it’s so important.

We started fundraising in February, the donations have now reached £4864.75, including gift aid.  This is an amazing amount and we’d like to thank everyone who donated and helped raise awareness of this terrible disease. We had set ourselves a target of £600, thinking this would be a realistic amount as we share friends and work colleagues.  We booked our trip through Absolute Escapes who arranged all our B&Bs, along with transporting our luggage from place to place which was ideal. All the accommodation places were first class with many providing packed lunches for the day which were most welcome.

Through our fundraising and along the walk itself, we spoke to so many friendly people who were interested in who we were raising funds for.  We found few people had heard of Lewy body dementia so we feel privileged to have helped raise awareness of this disease.  After our first day’s walk we had dinner in Russell’s in Spean Bridge and they kindly donated £20.

Every day of the walk was amazing – the views, accommodation, meals and the banter.  Some of the steep inclines were a challenge, as were the midges, but we were kept going with the thought of a nice gin & tonic or glass of wine at the end of each day, or in Yvonne’s case a pudding.  Some of the conversation got a bit silly at times but we shared lots and lots of laughs. The one about the pig in the Eco Café’s toilet between Drumnadrochit to Inverness took some beating.  One of the things we spoke about, and are grateful for, is that we are fit and healthy enough to have considered and completed the challenge.

On day three we were joined by another friend and colleague Lorna Simpson and we enjoyed dinner and drinks with Lorna and her husband David that evening. On the night of day five the Highland Council Chief Executive, Donna Manson, and her family treated us to drinks and nibbles. And on the last day we were joined by Cormac’s daughter Kara, who has herself raised thousands for the Lewy Body Society.  The encouragement and friendship they provided was much appreciated.

We’ve all had experience of dementia through family or friends. Margaret Ross’s mum and dad both had it, Josie’s father-in-law has it at the moment. Kirsty’s dad died from dementia her mum is now  living with it in a care home. Yvonne and Dawn have both witnessed the devastation it can cause through friends’ experiences.

On reaching the end of the walk we were met by family and friends, but the most important person to have been able to greet us was Cormac, the inspiration behind it all. It was very emotional and made the whole experience worthwhile.” 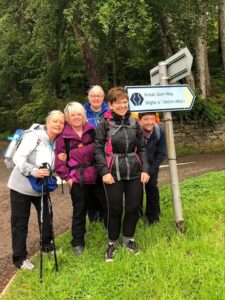 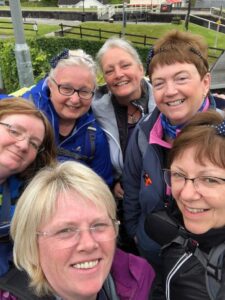