Each case of dementia with Lewy bodies (DLB) is as individual as the person living with it. Different people will show different combinations of symptoms. At present a diagnosis of DLB can only be confirmed by autopsy but a careful clinical evaluation of the patient and his or her symptoms can, in many cases, form the basis for making a reasonably confident lifetime diagnosis.

The symptoms of DLB can be grouped as central, core, suggestive or supportive [1]. 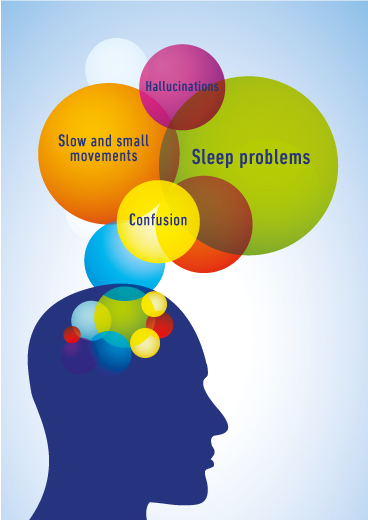 Central symptoms
The central symptom of dementia with Lewy bodies is dementia, or progressive mental decline serious enough to interfere with normal daily activities. Significant memory loss may not develop until later. There may also be problems with attention, problem solving and spatial awareness. This can easily be mistaken for Alzheimer’s disease or for Parkinson’s disease (PD) with dementia.
Core symptoms
Core symptoms: Dementia along with the existence of one of the core symptoms listed below can lead to a diagnosis of possible DLB. Two of the core symptoms in addition to dementia and the diagnosis of DLB is probable.

Typically people with DLB will experience extreme swings from alertness to confusion. These occur unexpectedly over any period of time, from minutes to days. If a person who has been diagnosed with Alzheimer’s disease can sometimes play cards or follow a game of cricket, it could be DLB instead.

Two-thirds of patients with DLB experience vivid and recurrent visual hallucinations. For some people these are pleasant visions of animals or small children but others have terrifying, threatening hallucinations, which cause them – and their carers – intense distress.

People with DLB experience motor difficulties seen in PD patients such as slow movement (bradykinesia), rigidity and falls but sometimes do not experience the tremor which is characteristic of PD. With DLB there tends to be greater difficulty in walking, balance and facial impassiveness than in PD [2, 3]. In both diseases the patient may suffer from autonomic symptoms such as sudden drop in blood pressure upon standing, difficulty in swallowing , incontinence or constipation [4, 5].

REM sleep is the deep sleep in which people dream. A certain amount of good, undisturbed REM sleep is necessary in order for people to function efficiently. DLB sufferers may talk in their sleep or act out their dreams. Some times this is so marked that the sufferer may fall off the bed.

Sometimes people with DLB are prescribed neuroleptic (anti-psychotic) drugs to help with their symptoms. This should only be done by someone experienced in the illness as many of these drugs can be extremely harmful or even fatal to people with DLB (see Treatment).

A diagnosis of DLB is less likely if the person has had a stroke or other illness which may have affected motor or mental ability.